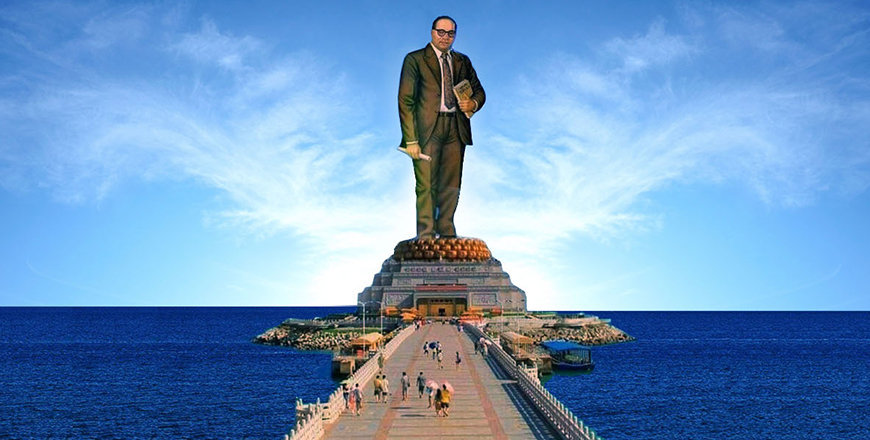 Jai Bheem Ambedkar trust is an establishment which is worked on the basis of vision, essence and principles of Dr.Ambedkar for the social,cultural and economic welfare for the people of India.To create a thorough change in voluntary service and to stand against the caste and creed system,Baba Sahib Ambedkar deliberately aimed for achieving the progress of inferior people.

Jai Bheem Ambedkar trust works with the objective of ensuring that rules and regulations of Indian constitution and the law that lengthening the entire population of non-economic non-pecuniary advantage in the benefit of the law.As part of this,it is decided to establish India's father and architect Bharat Ratna Dr.Bheem Rai Ramji Ambedkar's, world's hugest statue at the height of 192 meters.

The Ambedkar statue will be situating with the facility to observe the interior sea,from below it's platform for about 200 people at a time .It is armoured to visit for about 50,000 persons daily.This project which may attracts a lot of attention ,will stand as a symbol of intelligence activities of Baba Sahib, is to boost the cultural heritage of Kerala and promote the removal of untouchability around the world.

The cost of this project is 620 crores.Of these, 180 Crores will be contributions from the public. About 50 crores worth properties has been awarded by the Managing Trusty. About 400 crores is undertaken by the project of Central government.

Dr. Baba Sahab, the father of Bharat and the venerable person, who lightened the progress of each single person in Bharath, a freedom to live ,free of pride, freedom of expression and freedom of justice and freedom of religion, allowing ones legal protection to be a democracy, a nation that is always dominated by its rights, it is requested your financial assistance for the success of this initiative.